By Flapper Choo - August 07, 2015
It's the much-anticipated jubilee weekend.  Perfect excuse for well... a long weekend.  This also means it is time for me to unveil my third adventure, my third official video for the Sony campaign.

As part of the campaign, I wanted to do a fun 'Flapper the Tourist' series of me exploring the sights of Singapore leading up to our grand SG50 National Day.  And one thing that I really wanted to do - go on the Singapore Flyer and video the spectacular manmade skyline vision of our country.

Ah-but-then.
I was politely rejected for 'safety reasons'.

Uncle Nic, "Have you tried the railway trail?  It's quite nice."

Then mummy and I recalled the days we used to hang out at Blooie's, staring at the railway track opposite us.   I know, I know... the rail corridor has been there a long time and maybe loads of the other dogs in Singapore have already done this trail.  Better late than never.

And with many thanks to a particular CY Leong for doing up those spectacular maps of the routes, I discussed with mummy and we decided that this shall be our third official adventure.  We will do it (not the entire route at once!) to show our support for this preservation cause.

When one thing does not happen, some thing else would come along.
That's life.

We, dogs, love nature. Period.
Perfect cause to support. 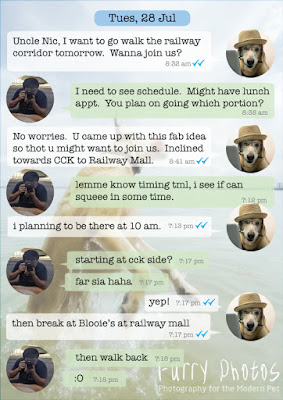 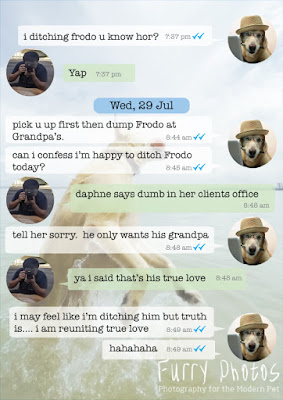 Breaking the news to Frodo: 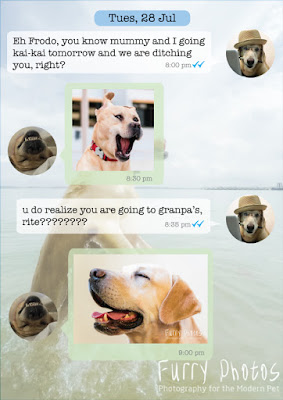 We were blessed with pleasant weather.   It was nice and cool as we were walking and it was worryingly HOT during our lunch break then the weather started behaving itself as we made our way back.

For this adventure, even though it seems to be just a boring 'ol straight walking trail that should probably not qualify as a 'new adventure' but the railway track was a part of Singapore's history.

I am glad I did this easy trail because...


It may not be as touristy as going on THAT Singapore Flyer but I think this is such a nice part of what this country has (not for long, I am sure) that I think it should qualify as a 'tourist attraction' too.

I am so glad my sleep buddy, Uncle Nic, decided to work his schedule out to join us for this trail.   It releases mummy the stress of "how to take decent action videos?"

And yes, even more glad that we decided to ditch Frodo.  Haha!

Okay okay, we did miss Frodo loads.  It's always quieter and less dramatic without him.  But sorry Frodo, mummy said she really misses having some solid time with me.

It was such a nice adventure that mummy took DAYSSSSSSS to finish editing the video.  I am limited to 2-3 minutes per video but I love love love the long-winded 5 minutes edition as it captured the story of this journey.

Uncle Nic would usually lug along one of his huge-a** DSLR camera to either experiment or just to capture the moments but we decided to go 100% Sony Action Cam for this Railway Trail.

In addition, we used the Advanced SteadyShot function as well.  For the fast-paced action shots, the camera was set at 1080/120fps - for smoother slow-mo shots.

Tips on using the Action Cam:

And that's my Railway Trail adventure with the Sony Action Cam!

I overheard mummy discussing with Uncle Nic about my next 'round-the-country' adventure.