The Week Gone By Part 2: That Acting Thing

Ok Ok... I am well aware that it has been more than "the week gone by".  I cannot help it!  I am such a busy boy juggling between maintaining my social activities and that little bit of work... you know, that acting thing.

I should [un]consider firing that ghostwriter of mine.


What a fun and exciting day I had today!

First and foremost, and most importantly,

CAN SOMEONE PLEASE SHOUT HOORAH THAT MY ANTIBIOTICS FEEDING IS FINALLY OVER!

Time to throw a celebration!

And celebrate, I did!

Rock and roll time with my pals.
And yes, TGIF too! 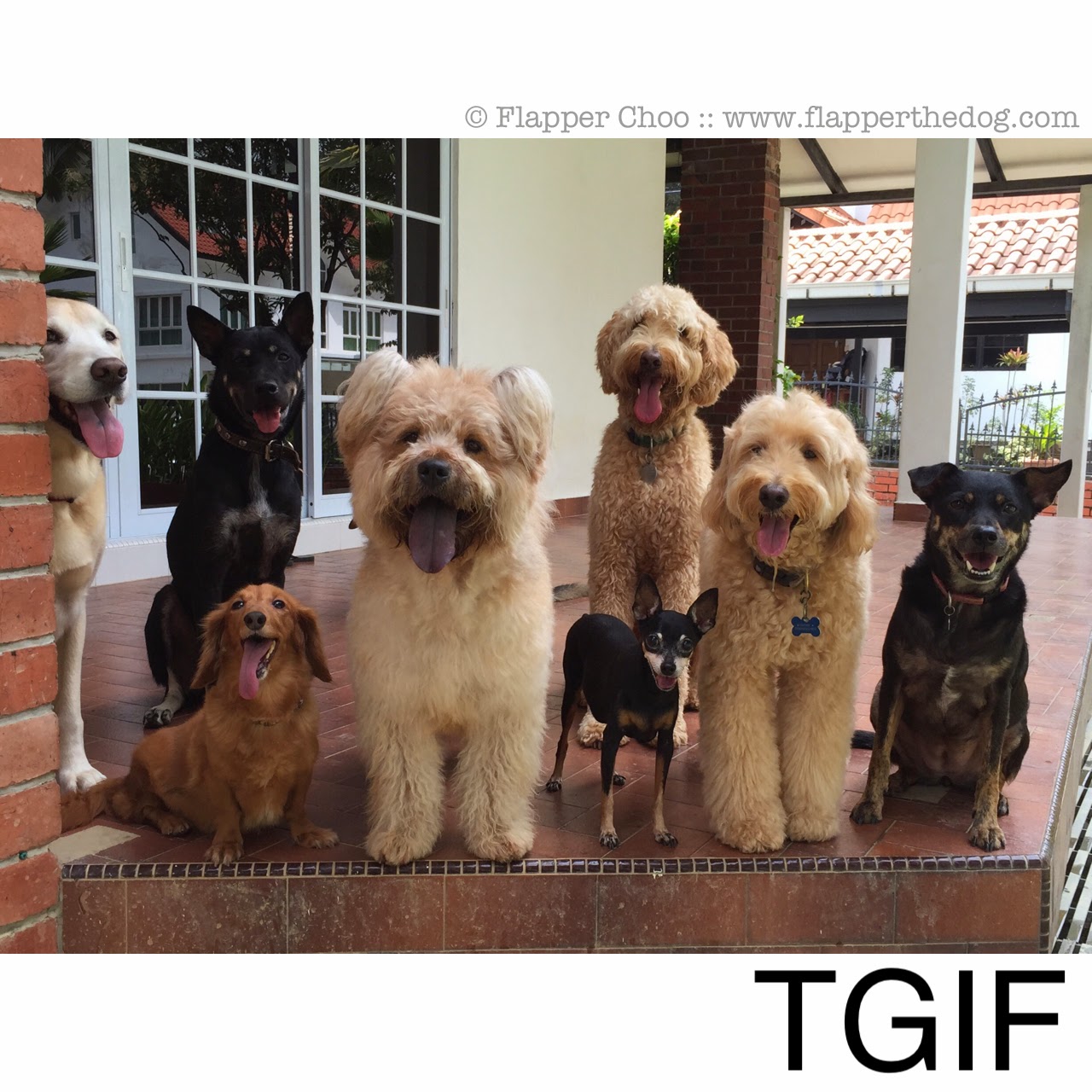 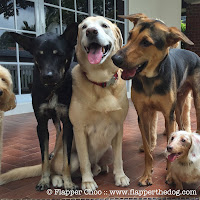 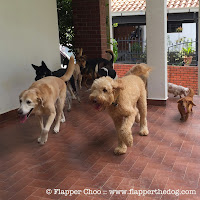 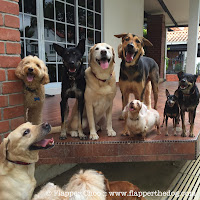 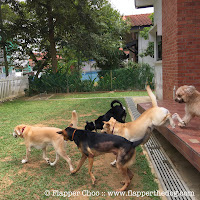 So erm... yeah.  I was sort of busy with that acting thing again.

Just one episode.
Three days of work.
Oodles of fun.

I am such a lucky boy to be selected again for the role by Director Lye Lin.

With three TV shows under my invisible belt, surely it's clear that I enjoy with her.  Our projects are always interesting.  The storylines may not be too 'popular' by mainstream context but there is always some meaningful morals behind the shows she works on.

So when we received the text from Lye Lin, we knew this new show had to be something interesting and meaningful again.

Actually, my first response was, "Seriously?  You want to work with me... again?".

There's that oooolllddddd saying in film industry, "Never work with children or animals".

And here's this very brave director who has chosen to work with blonde me, this blonde dog who is otherwise also known as an animal, THREE times!

This also means, with each show that we work on together, she does increase the difficulty of shots for me!

No.
Not the choice of movements or tricks I need to execute.
But the camera angle and placement!

And with each challenging shot/camera placement that caused mummy to break out in beads of perspiration, we can hear somewhere in the background, "I know Flapper can do it!"

Jokes aside, I have to really give huge thanks to Lye Lin for choosing me again and for being so so so nice to me all the time.

Also, thank you for always taking the time to let us know in advance what the scenes we will be shooting [in English] and your openness to ideas and suggestions.

I love working with you.


When I first found out who my on-screen "mummy" would be, I was mighty happy and excited!

I FINALLY got to meet and work with the gorgeous and charming Rebecca Lim again!

Our last quick encounter was on set of "Sudden".  We had only two scenes together and my character then was supposed to ignore her.... which I did!

Then we were supposed to be filming "Mystic Whispers" together but.....

But better late than never.

It was truly an honour to know this wonderful lady.

Rebecca has such an awesome personality.  She is friendly and genuine.  No diva air about her.  She is fun, spontaneous... and a good laugh to be around with.  She is not squirmish and all-girly when we had to do THAT scene (read below).  A fantastic sport!

I love her generous hugs, her "paparazzi" ways whilst I'm filming... and guys, don't be jealous... but I do go home wearing the smell of her perfume.


My Favourite Moments with Rebecca Lim

How can I not love Rebecca?


Then I found out who my on-screen "daddy" would be.

I must admit it was a bit of a gulp moment.
Not that I think Tay Ping Hui is a big bad wolf or anything.
It is always that tad bit daunting when it is someone unfamiliar...

And this someone happens to be a strappy, six-foot-one tall dude whom I'm suppose to "take" his hand in one scene.

Beads of perspiration started rolling down her head again.

I could not give two hoots.

I just slept while mummy was frantically texting Lye Lin the improbability of achieving that shot.

Despite mummy training me for that particular scene, she was far from confident about the actual execution.

Then the bomb came on the actual day of shoot.
Changes and camera angle.
THE most challenging scene.

And that was the first time I heard it... "I know Flapper can do it."

Well, you will have to watch the show to find out if I actually did it.

He is definitely very confident in his approach towards dogs... bordering towards military-like sometimes - the voice!  LOL.

But he has very good body language which makes it very easy for us, dogs, to read him.

He was also very patient and THANK GOODNESS, not squirmy about THAT scene.  He took it on like a real sport and even tried helping me out with THAT scene.

It was a relief, really.
I could not be luckier to work alongside with him.

Then strappy six-foot-one dude had his "awwwww" moment when I pulled some moves and tricks.....  lost a bit of macho credibility there!

So yes, I am that blessed blonde boy that got it good with my new on-screen" daddy.

This change... ain't too bad after all.


On the last day of shoot, I was told a reporter from TODAY will be coming down on set.

I secretly hoped it would be the lovely May Seah.

I had a blast spending the morning with her last September when she did a great write-up about me and interviewed me for "Mystic Whispers".


And who did I see walking through the door?
Yep!  May Seah herself!

Our running joke:
When I first met her in Sep 2014, I licked her armpit.
Now when we meet again, I up-skirt her!

It was fantabulous meeting her again.

And while she and mummy were busy chatting away, she indulged me in belly-rubs.


"Love?" premieres on 24th February 2015, 9 pm on Channel U.
I think there are six episodes to the show.  Each episode features an individual story so that's interesting.  Clearly, each story has something to do with love and relationships....

Sorry guys, I really have no idea the storyline behind each episode!

Please do watch to support the show... and me!  :P

Last but not least, to end of this super long entry, I would like to say that this acting thing is NOT about the fame and fortune.

I accidentally and surprisingly rose to a modest fame after "Sudden" and fortune... well, truth be told there's no fortune in being a 'canine actor'.

If you think about it, I average one show per year.
I do not get commercial deals.
So fortune, sounds good but no.

To put that hell-annoying frequently asked question out of the way....
YES.
I do get paid for 'acting'.

I quote, "Work to earn or work to learn".

There's a bit of the former but more of the latter.

You see, this acting thing is really just fun projects I do with mummy.  It is OUR time to be together, OUR bonding time, OUR fun time and whatever we do in life, is just for the experience.

"It is not about me as a "superstar" but it is about the creating memories, making our life moments count with no regrets."

This is really what this acting thing is all about.

MANY people have asked, "What about Frodo?"

And here is mummy's reply, "You must remember that the priority is the dogs/cats as PETS.  If I had gotten Frodo intending for him to do EXACTLY what Flapper has achieved so far, then I am keeping him for the wrong reasons.  If Frodo shows talent in this area, sure I'll let him do it.  But if he doesn't, it's okay.  Him as a pet FIRST."

Remember, when the lights go down, I am but a very ordinary blonde dog who indulges in my regular activities - swimming, fetching the ball, rolling myself in mud, sand, grass... going for walks, letting my siblings annoy me.  LOL.

I am but a pet first.

It just so happened I found that acting thing along the way and I love it.